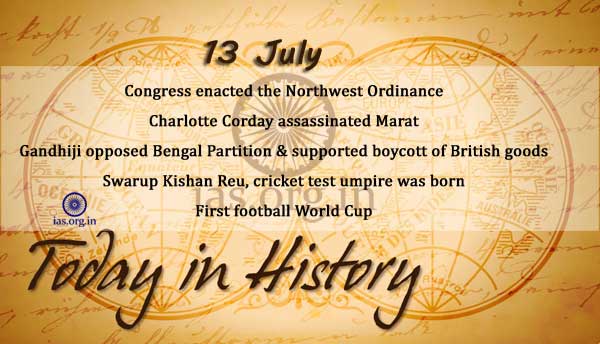 Baji Prabhu Deshpande, one of the warriors in Chhatrapati Shivaji Maharaj’s kingdom, died.

On this day in 1787, Congress enacted the Northwest Ordinance, structured settlement of the Northwest Territory and created a policy for the addition of new states to the nation.

Jean Paul Marat, one of the most outspoken leaders of the French Revolution, was stabbed to death in his bath by Charlotte Corday, a Royalist sympathizer.

Raja Ram Mohan Roy and Alexander Duff, in 1921 Scottish Church College, General Assembly Institution was established with only five students, where teaching of the Bible took an important part.

Gandhiji opposed Bengal Partition, supported boycott of British goods. During Lajpat Rai’s deputation to Britain, he appealed to Colonial statesmen to treat India “an integral part of the Empire” with consideration.

Swarup Kishan Reu, cricket test umpire for 17 tests from 1978-85, was born in Delhi and was honoured by Padmashree in 1986. He joined the record of umpiring most Tests for India.

The Battle of Kursk, involved some 6,000 tanks, two million men, and 5,000 aircraft, which ended with the German offensive repulsed by the Soviets at heavy cost.

An Indian Independence Bill was moved in the British Parliament on 4th July 1947 which became an ‘act’ on 13th July 1947. Two Boundary Commissions under Sir Cyril Radcliff were appointed to demarcate the boundaries of Punjab and Bengal.

Nehru asked Stalin and Acheson to restore peace in Korea.

India’s first one-day international was played vs England at Headingley.

On July 13, 1985, at Wembley Stadium in London, Prince Charles and Princess Diana officially opened Live Aid, a worldwide rock concert organized to raise money for the relief of famine-stricken Africans.

India and Germany signed an agreement on promoting and protecting investment in Bonn.

The Government was prevented from tabling the Women’s Reservation Bill.