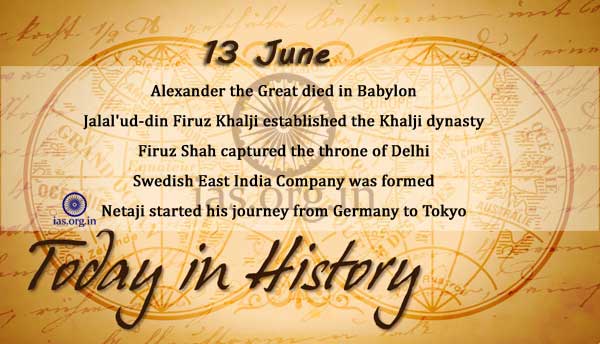 Alexander the Great, the young Macedonian military genius who forged an empire stretching from the eastern Mediterranean to India, died in Babylon, at the age of 33.

Firuz Shah captured the throne of Delhi and Sultan Jalal’ud-din Khalji called himself.

Clive marched to Murshidabad against Nawab Siraj ud-Daulah along with the force comprising of 1800 British and 2000 Indian soldiers with eight canons.

Gandhi lived in a garret amongst the poor in London.

Revolutionary leader Udham Singh was hanged for charges of assassinating Micheal Odair, who was the Governor General of Punjab at the time of Jalianwala Baug massacre.

Netaji Subhashchandra Bose started his journey from Germany to Tokyo by a submarine.

After more than a decade in space, Pioneer 10, the world’s first outer-planetary probe, leaves the solar system. The next day, it radioed back its first scientific data on interstellar space.

India rejected G-8 prescriptions saying they are ”coercive and intrusive” and intended to freeze the nuclear weapon capabilities of New Delhi and Islamabad.