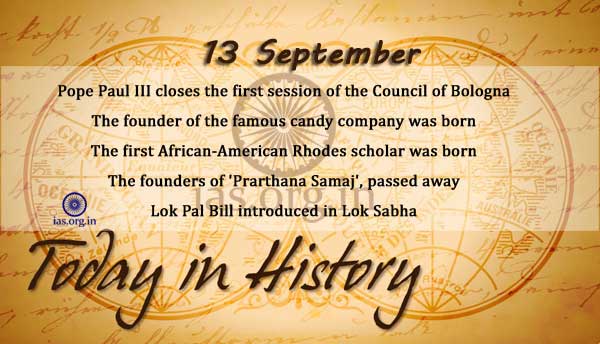 Pope Paul III closes the first session of the Council of Bologna.

The Constitutional Convention authorizes the first federal election resolving that electors in all the states will be appointed on January 7, 1789.

Milton Hershey, founder of the famous candy company, was born.

Mama Parmanand, one of the founders of ‘Prarthana Samaj’, passed away.

An unmanned Mercury capsule is orbited and recovered by NASA in a test.

An attempt to hijack a Coimbatore-Bangalore-Madras Indian Airlines flight IC 534 to Sri Lanka.

Grieving India lays to rest Mother Teresa in state funeral in Calcutta in which pomp and splendour is combined with religious rites.

Central Government withdraws the ban on use of non-iodised salt despite protests from the medical community and several state governments.