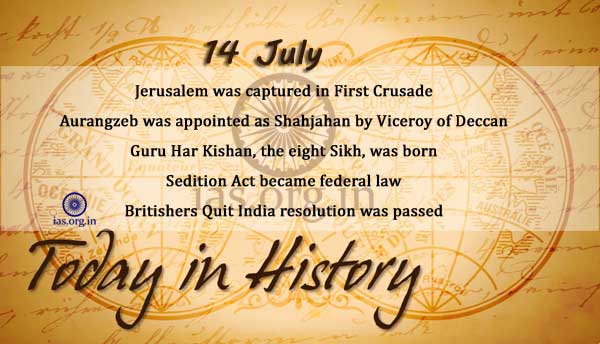 During the First Crusade, Christian knights from Europe captured Jerusalem after seven weeks of siege and began massacring the city’s Muslim and Jewish population.

Aurangzeb was appointed as Shahjahan by Viceroy of Deccan.

Parisian revolutionaries and mutinous troops stormed and dismantled the Bastille, a royal fortress that came to symbolize the tyranny of the Bourbon monarchs. This dramatic action signaled the beginning of the French Revolution, a decade of political turmoil and terror in which King Louis XVI was overthrown and tens of thousands of people, including the king and his wife Marie Antoinette, were executed.

On this day in 1798, one of the most egregious breaches of the U.S. Constitution in history became federal law when Congress passed the Sedition Act, endangering liberty in the fragile new nation.

Britishers Quit India resolution was passed by Congress Working Committee. They demanded departure of British and agreed on passive resistance until India’s independence. It was declared on 8th August, 1942 at August Kranti Maidan (Gowalia Tank).

Relations between the Soviet Union and China reached at the breaking point as the two governments engage in an angry ideological debate about the future of communism. The United States, for its part, was delighted to see a wedge being driven between the two communist superpowers.

On this day in 1974, U.S. Army General Carl Spaatz, fighter pilot and the first chief of staff of an independent U.S. Air Force, died in Washington, D.C., at age 83.

The Lok Sabha passed a bill seeking to confer on the President the powers of the Legislature of J&K.