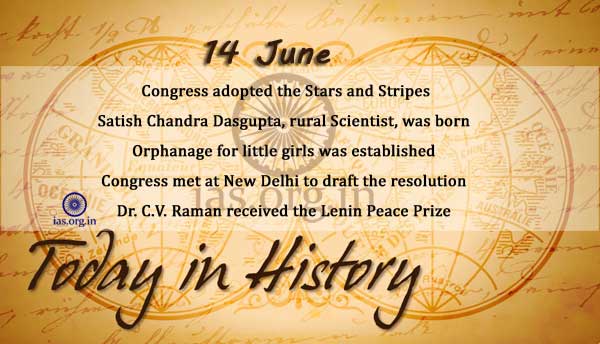 During the American Revolution, the Continental Congress adopts a resolution stating that “the flag of the United States be thirteen alternate stripes red and white” and that “the Union be thirteen stars, white in a blue field, representing a new Constellation.” The national flag, which became known as the “Stars and Stripes,” was based on the “Grand Union” flag, a banner carried by the Continental Army in 1776 that also consisted of 13 red and white stripes.

Orphanage for little girls was established.

A flash flood in Oregon kills 324 people on this day in 1903. The sudden onslaught of water caused millions of dollars in damages to the central Oregon town of Heppner.

On this day in 1922, President Warren G. Harding, while addressing a crowd at the dedication of a memorial site for the composer of the “Star Spangled Banner,” Francis Scott Key, becomes the first president to have his voice transmitted by radio.

Congress Working Committee met at New Delhi to draft the resolution to be placed before All India Congress Committee on the acceptance of Mountbatten plan for the partition of India.

RBI announces the introduction of appointing ombudsmen to redress grievances and disputes of bank customers.