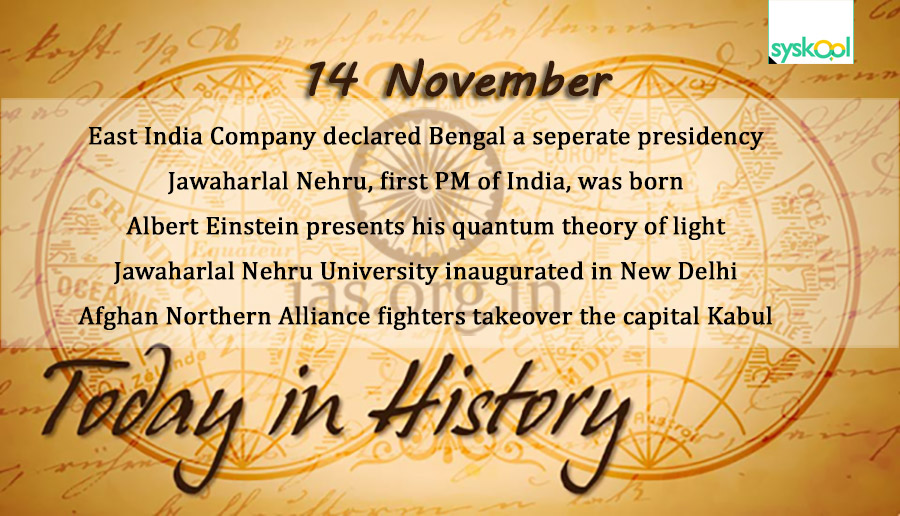 Jawaharlal Nehru, first Prime Minister of India, was born. To commemorate his birthday, this day is observed as ‘Children’s Day’ from 1957.

Republic of Czechoslovakia created with Tomáš Masaryk as its 1st president

Eight Language panel were started on the Rs. five denomination again. The printing colour of note was red. These languages were Urdu, Telugu, Kaithi, Tamil, Bengali, Kannada, Burmese and Gujarati.

Employees’ State Insurance Corporation was inaugurated by the President.

Nehru rejects China’s proposal for a mutual withdrawal of troops from a border buffer zone.

US government sends 90,000 soldiers to Vietnam

“Harry Potter and the Philosopher’s Stone” the 1st film adaptation of the books by J. K. Rowling, is released starring Daniel Radcliffe

Italy plunges into recession, its first since the start of 2005, after GDP contracts a steeper-than-expected 0.5% in the third quarter.

Eurozone officially slips into recession for the first time since its creation in 1999, pushed down by recessions in Germany and Italy.