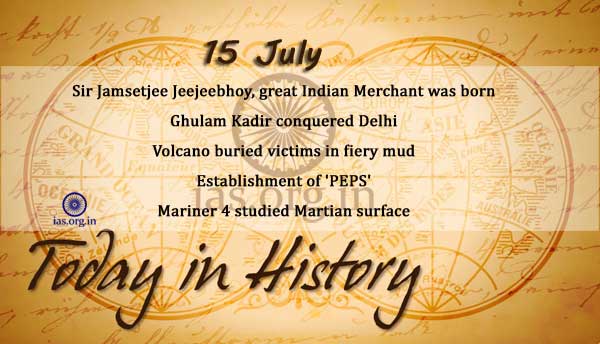 Sir Jamsetjee Jeejeebhoy, great Indian Merchant, Industrialist and philanthrophist, was born in Bombay. He aided famine relief, financed public works like wells, roads, causeways and bridges; founded dispensaries and hospitals; established educational institutions and scholarship funds; etc. He was receipent of a Knighthood and many medals.

The Bandai volcano erupted on the Japanese island of Honshu on this day in 1888, killed hundreds and buryed many nearby villages in ash.

Kumaraswamy Kamraj, great freedom fighter, social reformer, political leader and member of the Lok Sabha, was born in a trading family at Virudhunagar in Tamil Nadu.

On this day in 1918, near the Marne River in the Champagne region of France, the Germans began their final offensive push of World War I.

Bharat Ratna, India’s highest award, was announced to be given to Prime Minister Pandit Jawaharlal Nehru (1889-1964) by the President of India, Dr. Rajendra Prasad.

The unmanned spacecraft Mariner 4 passed over Mars at an altitude of 6,000 feet and sends back to The Planet Earth the first close-up images of the red planet.

Air Chief Marshal Arjun Singh, Padma Vibhushan, DFC. retired as the Air Officer Commanding, India Command. After retirement he was appointed as the Ambassador in Switzerland.

During a live television and radio broadcast, President Richard Nixon stuned the nation by announcing that he will visit communist China the following year. The statement marked a dramatic turning point in U.S.-China relations, as well as a major shift in American foreign policy.

India protested against China’s intrusion of six to seven km into the Indian territory in Arunachal Pradesh.