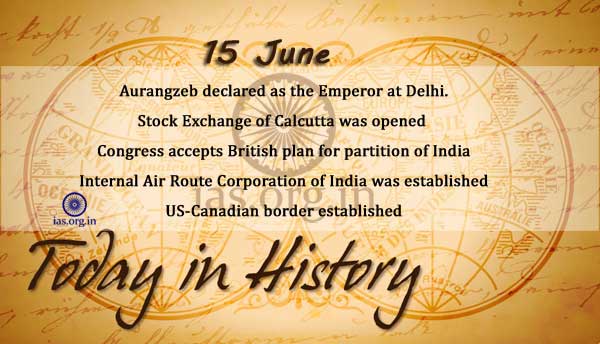 Aurangzeb declared as the Emperor at Delhi.

On this day in 1776, the Assembly of the Lower Counties of Pennsylvania declared itself independent of British and Pennsylvanian authority, thereby created the state of Delaware.

Representatives of Great Britain and the United States signed the Oregon Treaty, which settled a long-standing dispute with Britain over who controlled the Oregon territory. The treaty established the 49th parallel from the Rocky Mountains to the Strait of Georgia as the boundary between the United States and British Canada.

During the Civil War, Ulysses S. Grant’s Army of the Potomac and Robert E. Lee’s Army of Northern Virginia collided for the last time as the first wave of Union troops attacked Petersburg, a vital Southern rail center 23 miles south of the Confederate capital of Richmond, Virginia.

Henry Ossian Flipper, was born to a slave in Thomasville, Georgia, in 1856, and is the first African American cadet to graduate from the United States Military Academy at West Point, New York. Flipper, who never spoken to a white cadet during his four years at West Point, was appointed a second lieutenant in the all-African American 10th Cavalry, stationed at Fort Sill in Indian Territory.

More than 1,000 people taking a pleasure trip on New York City’s East River are drowned or burned to death when a fire sweeps through the boat. This was one of the United States’ worst maritime disasters.

Dr. Darashaw Nosherwan Wadia, great pioneer in Indian Geology and professor in development of geo-scientific research in the country, passed away at New Delhi at the age of 86.

Supreme Court ruled that all children, regardless of citizenship, are entitled to public education.

Dalai Lama recoganised the rights of China in foreign affairs and Army Operations in Tibet region.

Punjab Government returned gold and other valuables seized from Golden Temple during the 1984 Blue Star operation to SGPC.

PM Narasimha Rao visited Oman; India and Oman decided to give each other MFN status.