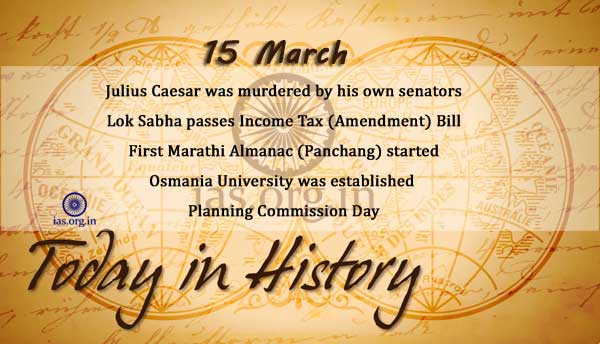 Julius Caesar, the “dictator for life” of the Roman Empire, was murdered by his own senators at a meeting in a hall next to Pompey’s Theatre. The conspiracy against Caesar encompassed as many as sixty noblemen, including Caesar’s own protege, Marcus Brutus.

Guru Hanuman was born at Jhunjhunu, Rajasthan. He was the pioneer and contributor of wrestling in India. He was bestowed with the Padamshri in 1983. His pupil Satpal and Kartar Singh won Gold Medals in Asian Games.

Osmania University was established at Hyderabad.

President Lyndon B. Johnson addressed a joint session of Congress to urge the passage of legislation guaranteeing voting rights for all.

Mr. Vajpayee is appointed Prime Minister. The number of MPs supporting the formation of a government by the BJP stands at 264 in a house of 539, just short of the working majority of 270. However, the President sees the figure as crossing the half-way mark as the Telugu Desam decides to remain neutral. Earlier, the Congress(I) conveys to the President its decision not to stake claim to form a government.