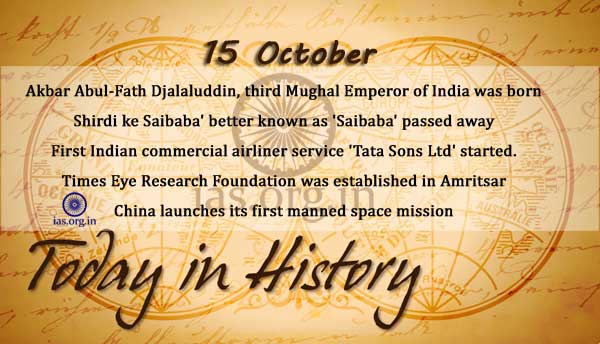 Akbar Abul-Fath Djalaluddin, third Mughal Emperor of India (1556-1605), was born at Amarkot in Sind under the protection of Rana Virsal. Humayun had also taken refuge at Amarkot.

King of England permitted the East India Company to mint the Rupee and Paisa coins at Bombay.

Aurangzeb attacked and conquered Bijapur and this was the end of the Muslim Adilshahi’s era.

Mata Hari, a Paris dancer, is executed by the French after being convicted of passing military secrets to the Germans.

Shirdi Ke Saibaba’ better known as ‘Saibaba’ passed away at Shirdi near Nashik, Maharashtra. He was around 70. Born in a Brahmin family at Patri village in Hyderabad, he was the saint of all caste and creed people.

Muslim League decides to participate in the Interim Government.

Process of the integration of the Indian State was completed when the last three states – Tripura, Manipur and Banaras were merged.

Huey P. Newton and Bobby Seale establish the Black Panther Party, an African-American revolutionary socialist political group, in the US.

Sachin Tendulkar becomes the highest run-getter in one-day internationals (9379 runs) during his innings of 69 in the final of the ICC cricket tournament against New Zealand.