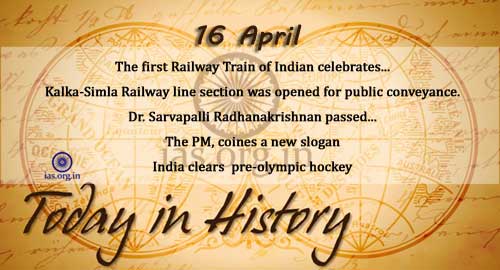 The first Railway Train on Indian sub-continent, while celebrating its birth, covered a streach of 21 miles i.e. 35 kms from Bombay to Thane. In the inauguration ceremony, 14 railway carriages carrying about 400 guests left Bori Bunder (presently C.S.T.) at 3.30 pm amidst the loud applause of a vast multitude and to the salute of 21 guns to reach the destination.

India wins the second leg of the pre-olympic hockey tournament at Perth.