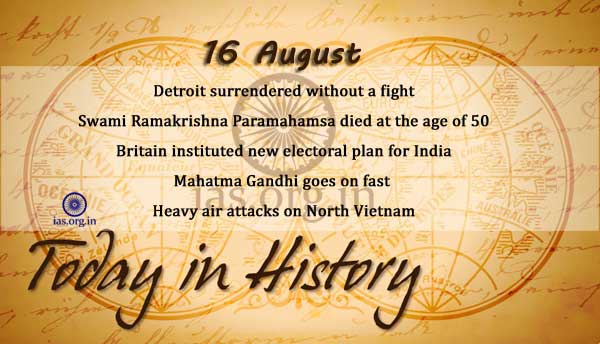 During the War of 1812, American General William Hull surrenderd Fort Detroit and his army to the British without a fight. Hull, a 59-year-old veteran of the American Revolution, had lost hope of defending the settlement after seeing the large English and Indian force gathering outside Detroit’s walls. The general was also preoccupied with the presence of his daughter and grandchildren inside the fort.

Swami Ramakrishna Paramahamsa dies at the age of 50. His real name was Gadadhar Ghatterji. An Indian mystic, leader and saint, he preached unity of religions. Swami Vivekanand was his disciple.

While salmon fishing near the Klondike River in Canada’s Yukon Territory, George Carmack reportedly spoted nuggets of gold in a creek bed. His lucky discovery sparked the last great gold rush in the American West.

Mahatma Gandhi goes on fast for being denied to continue the anti-untouchability propaganda.

On this day in 1945, Lt. Gen. Jonathan Wainwright, (captured by the Japanese on the island of Corregidor, in the Philippines), was freed by Russian forces from a POW camp in Manchuria, China.

Hindus and Muslims riot in Calcutta. 90 people lost their lives and other 900 were hurt. The Muslim League observed a “Direct Action Day” and announced its withdrawal of support from all plan.

Pather Panchali’ won the top five awards, including feature length motion picture, and got a honorary mention at the Vancouver International Film Festival.

U.S. fighter-bombers fly 370 air strikes against North Vietnam, the highest daily total of the year; additionally, there were eight B-52 strikes in the North. Meanwhile, U.S. warplanes flew 321 missions (including 27 B-52 strikes) in South Vietnam, mostly in Quang Tri province.