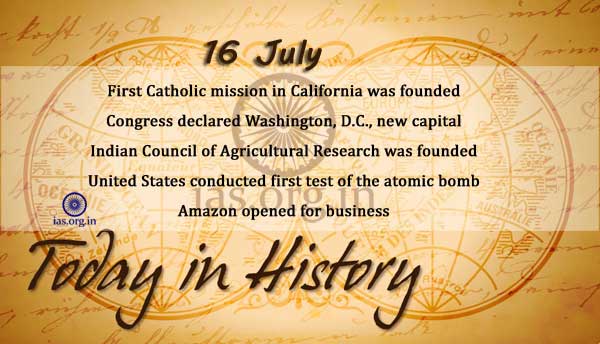 On this day in 1790, the young American Congress declared that a swampy, humid, muddy and mosquito-infested site on the Potomac River between Maryland and Virginia will be the nation’s permanent capital. “Washington,” in the newly designated federal “District of Columbia,” was named after the leader of the American Revolution and the country’s first president: George Washington. It was Washington who saw the area’s potential economic and accessibility benefits due to the proximity of navigable rivers.

Ishwar Chand Vidyasagar, on the request of Governor Lord Canning, instituted a law announcing the right of Hindu widows for re-marriage.

A decision to boycott British goods was taken at Bagarhat.

The world’s first parking meter, known as Park-O-Meter No. 1, was installed on the southeast corner of what was then First Street and Robinson Avenue in Oklahoma City, Oklahoma on this day in 1935.

On this day in 1945, at 5:29:45 a.m., the Manhattan Project came to an explosive end as the first atom bomb was successfully tested in Alamogordo, New Mexico. The United States conducted the first test of the atomic bomb at the Trinity bomb site.

French rule ended in Mahe. De facto power was transferred to the people and the Indian flag hoisted.

At 9:32 a.m. EDT, Apollo 11, the first U.S. lunar landing mission, was launched from Cape Canaveral, Florida, on a historic journey to the surface of the moon. After traveling 240,000 miles in 76 hours, Apollo 11 entered into a lunar orbit on July 19

More than 1,000 people were killed when a 7.7-magnitude earthquake striked Luzon Island in the Philippines on this day in 1990. The massive tremor wreaked havoc across a sizeable portion of Luzon, the country’s largest island, with Baguio City suffering the most devastating effects.

On this day in 1995, Amazon officially opened for business as an online bookseller.

Supreme Court said dowry demand even during marriage talks is an offence.