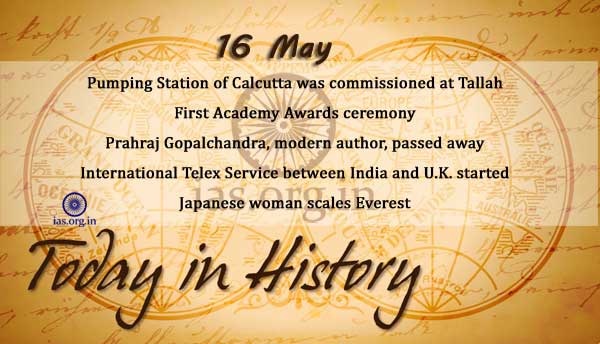 Pumping Station of Calcutta was commissioned at Tallah.

On this day in 1929, the Academy of Motion Picture Arts and Sciences handed out its first awards, at a dinner party for around 250 people held in the Blosso Room of the Roosevelt Hotel in Hollywood, California.

Hundreds died in fighting between Muslims and Hindus at Bombay.

In France, the May 1968 crisis escalated as a general strike spread to factories and industries across the country, shutting down newspaper distribution, air transport, and two major railroads. By the end of the month, millions of workers were on strike, and France seemed to be on the brink of radical leftist revolution.

Via the southeast ridge route, Japanese mountaineer Junko Tabei became the first woman to reach the summit of Mt. Everest, the tallest mountain in the world.

Sikkim High Court was established at Gangtok for Sikkim territory.

Sikkim  was declared as the 22nd state of Indian Union.

V. Shantaram, 75, was chosen for the Dada Saheb Phalke award.

Government of India decides not to extend the validity of TADA Act.

Today in History -13 May