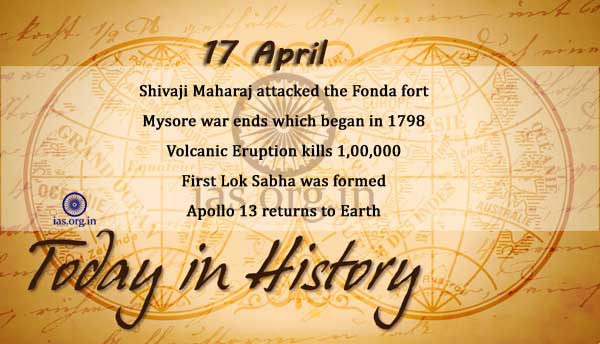 Srirangapatnam was surrounded by British Army in the fourth and last Mysore war which began in 1798. Tipu Sultan’ was killed in the battle on 4th May. The East India Company announced the Seringapatanam Medal (1799).

Heavy eruptions of the Tambora volcano in Indonesia are letting up by this day in 1815. The volcano, which began rumbling on April 5, killed almost 100,000 people directly and indirectly. The eruption was the largest ever recorded and its effects were noted throughout the world.

Office of Price Administration was formed which handled the rationing of essential commodities.

Gandhiji, in a statement regarding the ensuing San Francisco Conference, says that ‘peace is impossible without equality and freedom of India’. Also demands a just peace for Germany and Japan.

Apollo 13, a U.S. lunar spacecraft that suffered a severe malfunction on its journey to the moon, safely returns to Earth.