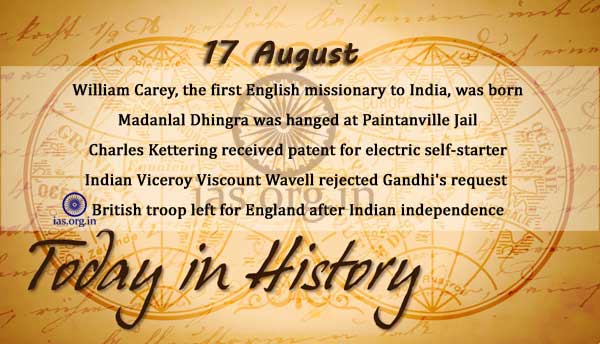 William Carey, the first English missionary to India, was born. He taught at the newly founded Fort William College at Calcutta from 1801 till his death and helped found the Serampore Press, which made the Bible accessible to over 300 million people.

The first British troop left for England after Indian independence.

The first microwave link, which was set up without foreign assistance, was commissioned between Asansol, Dhanbad and Ranchi.

The Double Eagle II completes the first transatlantic balloon flight when it lands in a barley field near Paris, 137 hours after lifting off from Preque Isle, Maine. The helium-filled balloon was piloted by Ben Abruzzo, Maxie Anderson, and Larry Newman and flew 3,233 miles in the six-day odyssey.

I K Gujral, Prime Minister, said that Queen Elizabeth should not go to Amritsar, scene of Jallianwalla Bagh massacre, during her visit to India in October.

On this day in 1998, President Bill Clinton became the first sitting president to testify before the Office of Independent Council as the subject of a grand-jury investigation.

On this day in 1999, an earthquake in northwestern Turkey killed more than 17,000 people and left more than 250,000 homeless. The immense disaster exposed serious problems with government and building contractors in Turkey.