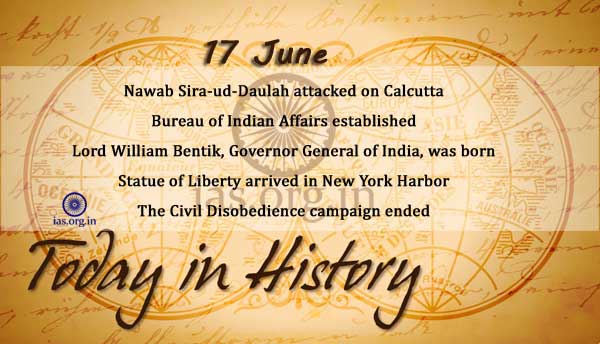 Nawab Sira-ud-Daulah attacked on Calcutta with 50,000 soldiers and captured it on June 21.

On this day in 1885, the dismantled Statue of Liberty, a gift of friendship from the people of France to the people of America, arrived in New York Harbor after being shipped across the Atlantic Ocean in 350 individual pieces packed in more than 200 cases. The copper and iron statue, which was reassembled and dedicated the following year in a ceremony presided over by U.S. President Grover Cleveland, became known around the world as an enduring symbol of freedom and democracy.

Burma was adopted as republic by constitution assembly.

Leander Vece Paes, tennis player who won a singles bronze at Atlanta Olympics (1996), was born. He was also a winner of French Open in 1999, Gold Flake Open, Newport 1998, Wimbledon 1999 (doubles and mixed doubles).