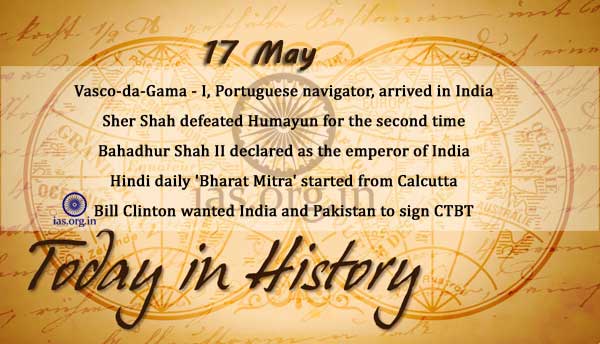 Admiral Dom Vasco-da-Gama (c.1469-1524)-I, Portuguese navigator, arrived in India. He sailed around the Cape of Good Hope to Calicut, Kerala with three vessels and was the first Westerner to sail to India from Europe. (17 or 20).

Admiral Dom Vasco-da-Gama (c.1469-1524)-I, Count of Vidigueira, met the Jamerin of Calicut after arriving in India three days ago at Malabar Coast. He was joined by an experienced Gujarati pilot at Malindi. He was the 6th Governor and 2nd Viceroy of India. (17 or 22).

Sher Shah defeated Humayun for the second time at Hardoi in U.P. in the battle of Kanauj.

Marathas were badly mauled in the battle of Arras by Col. Keating in the first Anglo – Maratha war.

Bahadhur Shah II declared as the emperor of India.

India decided with only one dissent vote to remain within the Commonwealth of Nations.

In a major civil rights victory, the U.S. Supreme Court handed down an unanimous decision in Brown v. Board of Education of Topeka, ruling that racial segregation in public educational facilities was unconstitutional. The historic decision, which brought an end to federal tolerance of racial segregation, specifically dealt with Linda Brown, a young African American girl who had been denied admission to her local elementary school in Topeka, Kansas, because of the color of her skin.

Nehru, who went to Ceylon to celebrate the 2,500th anniversary of the founding of Buddhism, called for an end to nuclear tests.

4 Indians successfully skied down from the slope of Trishul peak.

The Union Cabinet cleared a proposal for setting up a new appellate tribunal for foreign exchange following the withdrawal of the FERA and the enactment of FEMA in its place.

Previous articleAwe-inspiring: From Waiter to an IAS Officer (Top Rated Story)
Next articleRailway safety in India