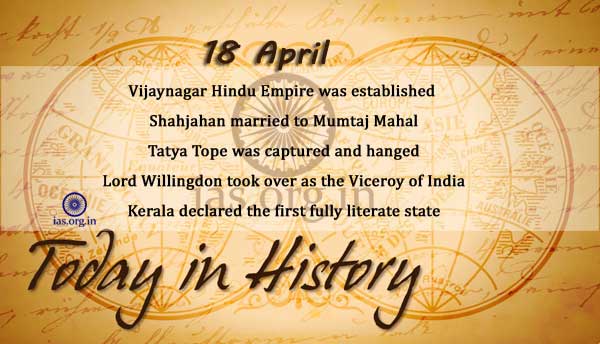 The famous Vijaynagar Hindu Empire established (1336-1565-1646), Deccan region of South India is founded. European visitors are overwhelmed by the wealth and advancement of its 17-square-mile capital.

Marriage of Shahjahan and Mumtaj Mahal.

Tatya Tope (his original name was Ramchandra Raghunath Tope) a leader of Sepoy Mutiny, was captured in April, courtmarshalled and hanged at Sivpuri for 1857 Indian Mutiny.

Damodar Hari Chapekar, India’s first revolutionary, was hanged in the Yervada Central Jail. He was punished for killing the Rand and Ayrest British Officials.

An earthquake estimated at close to 8.0 on the Richter scale strikes San Francisco, California, killing hundreds of people as it topples numerous buildings. The quake was caused by a slip of the San Andreas Fault over a segment about 275 miles long, and shock waves could be felt from southern Oregon down to Los Angeles.

Gandhi saw one of his testing grounds of Satyagraha in Champaran. He defied section 144 of Criminal Act.

Amboo alias Lalita Pawar was born in Indore. She will be always remembered as the a leading film actress and character artist. Her first film was ‘Ganimi Kawa’ (1928). Some of the other films of silent era are Shri Balaji, Bhimsen, Champion of the Sward, Chatur Sunderi, Goodbye Marriage, Flaming Soul, Kailash.

Lord Willingdon took over as the Viceroy of India.

Kerala declared the first fully literate state in the country.

The Board of Control for Cricket in India adopts a six-point code of conduct for the players.

16 Nepali mountaineering guides, most of them ethnic Sherpas, are killed by an avalanche on Mt. Everest, the Earth’s highest mountain. It was the single deadliest accident in the history of the Himalayan peak, which rises more than 29,000 feet above sea level.