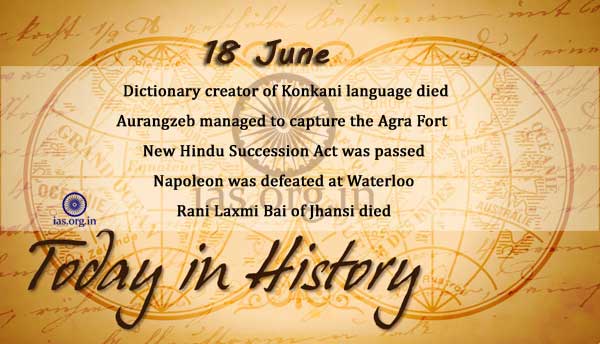 The day after the Senate followed the House of Representatives in voting to declare war against Great Britain, President James Madison signed the declaration into law–and the War of 1812 began.

At Waterloo in Belgium, Napoleon Bonaparte suffered defeat at the hands of the Duke of Wellington, bringing an end to the Napoleonic era of European history.

Rani Laxmi Bai of Jhansi died while fighting with the British troops in the battlefield near Gwalior.

First Satyagraha movement was started for Goa liberation from the Portuguese.

California’s hippie subculture converged into a mass of long hair, flowers, and rock music this weekend, as 50,000 flowed into the fairgrounds of the Monterey International Pop Festival. The event featured the largest collection of major rock acts ever assembled; thousands of fans had to be turned away from the sold-out concert. Established artists such as the Byrds, Jefferson Airplane, Otis Redding, and the Mamas and the Papas received the expected ovations from the huge audience. But the response was equally enthusiastic for performances by Indian sitar master Ravi Shankar and new talents Janis Joplin, the Who, and Jimi Hendrix, a young man who played the electric guitar like nobody else.

The Karakoram Highway, linking Gilgit in Pakistan-occupied Kashmir with Sinkiang in China, was opened.

India and Pakistan decided to end the five-year-old confrontation in Siachen Glacier area by redeploying their forces.

From Cape Canaveral, Florida, the space shuttle Challenger was launched into space on its second mission. Aboard the shuttle was Dr. Sally Ride, who as a mission specialist who became the first American woman to travel into space.