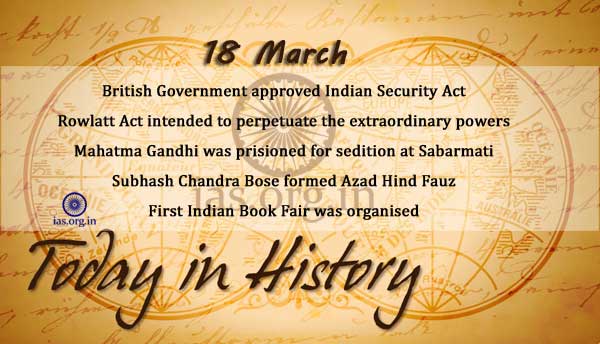 Rowlatt Act, intended to perpetuate the extraordinary powers enjoyed by the Government under Lord Chelmsford during the war, provokes countrywide protests. This Rowlatt Act was forced instead of 1915 Indian Security Act which reduced freedom of Indian people.

Mohandas K. Gandhi “”Mahatma,”” the great spirit, sentenced by British authorities to six years in prison for sedition at Sabarmati. Gandhi was sentenced just eight days after he was arrested. The British acted hastily after government officials in London and India were criticized for not arresting him sooner. In London, the Secretary of State for India was forced to resign because of the controversy over Gandhi. In India, the arrests of Gandhi and other Indian nationalists had only increased sympathy.

Socialist Party of India (SPI) disassociates itself from the Congress.

President confers gallantry awards on 65 personnel of the defence forces.

A.B. Vajpayee, the Prime Minister-designate, releases the ‘national agenda for governance’ in New Delhi. It is silent on the Ram temple issue, scrapping of Article 370 and a uniform civil code.