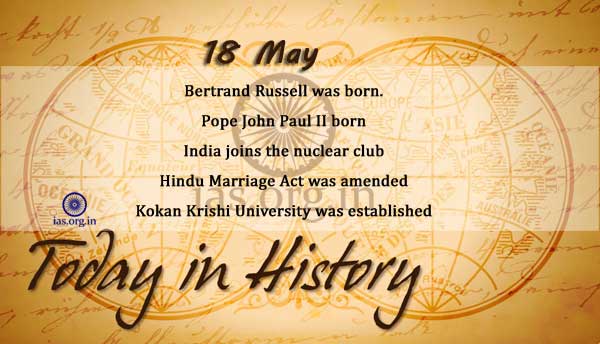 Narayan Govind Chitre, with the help of R. P. Tipnis and Cameraman Johnson, produced a 8000 ft. long theatrical film ‘Pundalik’, which was directed by Ramchandra Torney alias Dada Saheb Torne. The entire film was shot in a theatre at Mangaldas Wadi in Bombay, where the Sangit Mandali, a professional theatre group, was performing a play ‘Pundalik’. The film was released on May, 18 in the Coronation Cinematograph at Girgaum, Bombay.

On May 18, 1920, Karol Jozef Wojtyla was born in the Polish town of Wadowice, 35 miles southwest of Krakow.Wojtyla went on to become Pope John Paul II, history’s most well-traveled Pope and the first non-Italian to hold the position since the 16th century. After high school, the future Pope enrolled at Krakow’s Jagiellonian University, where he studied philosophy and literature and performed in a theater group. During World War II, Nazis occupied Krakow and closed the university, forcing Wojtyla to seek work in a quarry and, later, a chemical factory. By 1941, his mother, father, and only brother had all died, leaving him the sole surviving member of his family.

Hindu-Muslim riots took place in Bombay in which 150 were killed or injured. Jinnah – the permanent president of the Muslim league, began to spread the rumors that Muslim minority was in danger under Hindu majority and actively propagated the theory of two separate nations.

Panchanan Maheshwari, great Indian scientist of botany, passed away. He studied the morphology, anatomy and embryology of some angiosperms, the class of plants which produced flowers. He discovered species of plants like “Panchanania Jaipuriensis and Isoeted Panchananil.” He wrote two authoritative books, ‘An Introduction to the Embryology of Angiosperms’ & ‘Recent Advances in Embryology on Angiosperms’. In 1951, he founded the International Society of plant Morphologist.

A powerful underground explosion rocked India’s desert of Rajasthan , making India the sixth nation in history to set off a nuclear device. The blast, which took place at a depth of 330 feet, was in the range of 10-15 kilotons, smaller than the bomb exploded by the US at Nagasaki in World War II. India, signatory to the 1963 test ban treaty, was prohibited from exploding the device on land or in the air. Prime Minister Indira Gandhi claimed that the purpose of the test was peaceful and said ‘such explosions might have their use in mining operations’.

In the Rajasthan Desert in the state of Pokhran (Thar Desert) at 8:05 a.m., India successfully detonated its first nuclear weapon, a fission bomb similar in explosive power to the U.S. atomic bomb dropped on Hiroshima, Japan. The test fell on the traditional anniversary of the Buddha’s enlightenment, and Indian Prime Minister Indira Gandhi received the message “Buddha has smiled” from the exuberant test-site scientists after the detonation. The test, made India the world’s sixth nuclear power, broke the nuclear monopoly of the five members of the U.N. Security Council–the United States, the Soviet Union, Great Britain, China, and France.

Jayaprakash Narayan led a procession against economic conditions in Patna. There was a  lathi charge and he issued a call for total revolution. He also started the ‘Citizens for Democracy’ movement.

The ten-day Golden Temple siege at Amritsar ended with the surrender of 46 militant Sikhs.