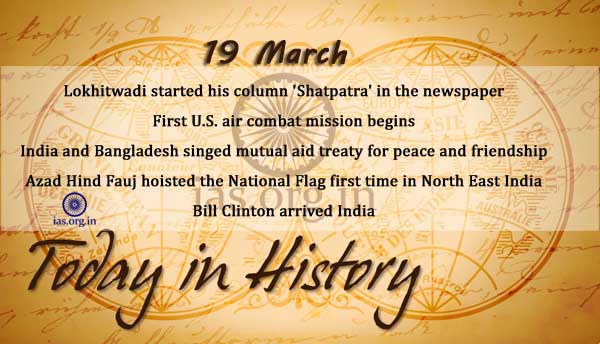 Lokhitwadi started his column ‘Shatpatra’ in the newspaper named ‘Prabhakar’.

Eight Curtiss “Jenny” planes of the First Aero Squadron take off from Columbus, New Mexico, in the first combat air mission in U.S. history. The First Aero Squadron, organized in 1914 after the outbreak of World War I, was on a support mission for the 7,000 U.S. troops who invaded Mexico to capture Mexican revolutionary Pancho Villa.

For the first time, audiences are able to sit in their living rooms and watch as the movie world’s most prestigious honors, the Academy Awards, are given out at the RKO Pantages Theatre in Hollywood, California.

The first helicopter S-55 arrived at Bombay by sea.

Raja Kelkar Museum, which belonged to Dinkar Gangadhar Kelkar, was opened for the people.

India and Bangladesh singed mutual aid treaty for peace and friendship for 25 years.

Acharya J. B. Kripalani, writer, nationalist, parliamentarian, founder of Kissan Mazdoor Dal and president of Indian National Congress in 1946, passed away at the age of 94.

Bill Clinton, US President, arrives to a warm welcome in India. This was the first presidential visit of a US head in two decades.