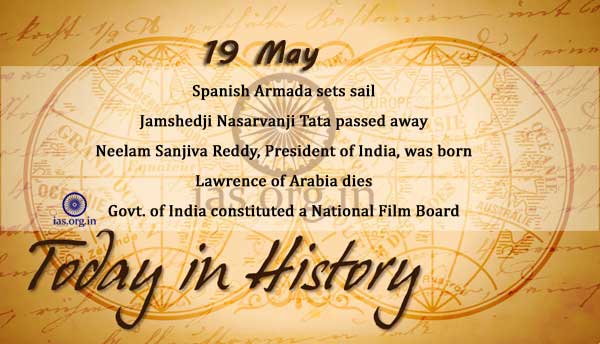 A massive Spanish fleet, known as the “Invincible Armada,” set sail from Lisbon on a mission to secure control of the English Channel and transport a Spanish invasion army to Britain from the Netherlands.

Jamshedji Nasarvanji Tata, famous industrialist and father of modern technology, passed away at Nauheim, Hesse-Nassau, France. He commenced cotton mills in Bombay and Nagpur and founded the Tata Iron and Steel Company, which was one of the largest integrated steel mills in the world.

T.E. Lawrence, known to the world as Lawrence of Arabia, dies as a retired Royal Air Force mechanic living under an assumed name. The legendary war hero, author, and archaeological scholar succumbed to injuries suffered in a motorcycle accident.

State to control production and distribution of minerals involved in atomic energy development.

The Govt. of India constituted a National Film Board.

The Indian govt. banend six U.S. and two British films for presenting a ‘disparaging’ impression of life in Africa, including ‘African Queen’ and ‘Mogambo’ at New Delhi.

One of the first major treaties designed to limit the spread of nuclear weapons came into effect as the Soviet Union ratifies an agreement banning nuclear weapons from outer space. The United States, Great Britain, and several dozen other nations had already signed and/or ratified the treaty.

About 20 crore voters went to the polls in the first phase of election in 204 constituencies of the 10th Lok Sabha.