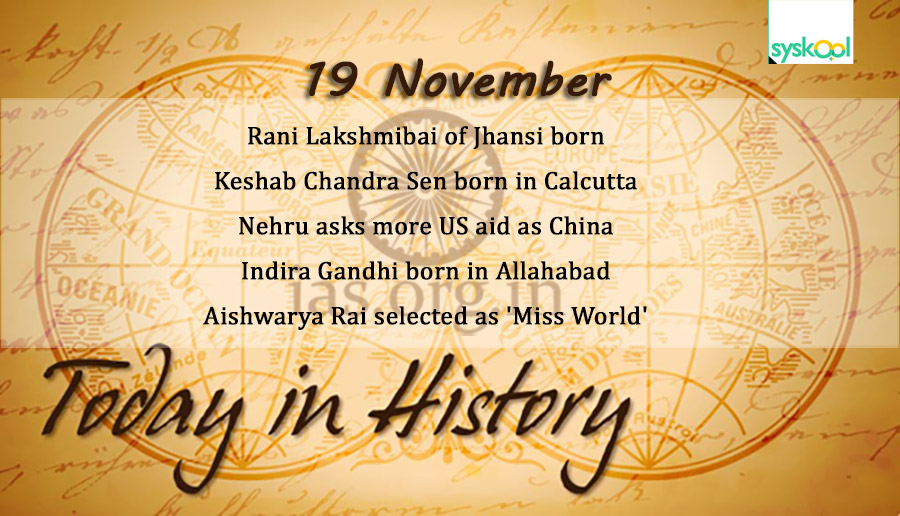 Rani Lakshmibai of Jhansi was born in Varanasi, Uttar Pradesh. She was named Manikarnika and was called ‘Manu’.

Keshab Chandra Sen (1838-84), nationalist leader of Bengal, was born in Calcutta. He was one of the first Indians to sow the seeds of secularism in the country. He joined the Brahmo Samaj in 1857 but seperated from it in 1866 and founded Brahma Samaj of India, a radical offshoot of the Adi Brahmo Samaj.

Indira (Pridarshani) Gandhi, the first Indian Lady Prime Minister, was born in Allahabad. She was the only child of Jawharlal Nehru and took active participation in freedom fight by forming “”Vanar Sena”” (a team of young detectives). She lead India in a successful war against Pakistan to seperate East and West Pakistans and establish the nation of Bangladesh.

Nehru asks more US aid as China drives into India in New Delhi.

Gavaskar gets twin cricket tons for India for second time.

Aishwarya Rai, selected ‘Miss World’ at the age of 21 in the beauty contest held at the 44th convention at Sun City, South Africa .