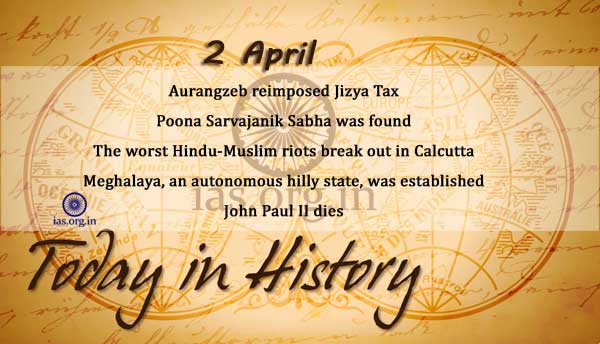 Aurangzeb reimposed Jizya Tax to finance the spread of Islam among Hindus.This Jeziya tax was abolished by Akbar.

Poona Sarvajanik Sabha was founded in which 95 members from different parts of Maharashtra assembled in Pune during this ceremony.

The worst Hindu-Muslim riots broke out in Calcutta.

Defence Minister announces the establishment of the National War Academy in Kharakvasla, Poona.

Nehru calls for a halt to the build up of nuclear weapons.

Meghalaya, an autonomous hilly state, was established after dividing the hilly areas of Assam.

The great silent film actor and filmmaker Charlie Chaplin prepared for his first voyage to the United States since 1952, when he was denied a re-entry visa amid questions about his leftist politics.

A division bench of Mumbai High Court holds that a married woman of a joint Hindu family can stake claim to her father’s property.

Guru Granth Sahib is a juristic person and can hold property, says the apex court in a judgment of “far-reaching consequences and great significance”.

John Paul II, history’s most well-traveled Pope and the first non-Italian to hold the position since the 16th century, dies at his home in the Vatican. Six days later, two million people packed Vatican City for his funeral that is said to be the biggest funeral in history.