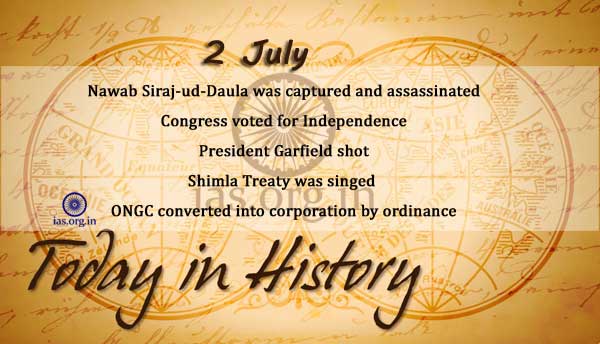 Nawab Siraj-ud-Daula was captured and assassinated. He was stabbed with a knife by Muhammad Beg at the instance of Miran, son of Mir Zafar.

On this day in 1776, the Second Continental Congress, assembled in Philadelphia, formally adopted Richard Henry Lee’s resolution for independence from Great Britain.

Only four months into his administration, President James A. Garfield was shot as he walked through a railroad waiting room in Washington, D.C.

On this day in 1917, several weeks after King Constantine I abdicateed his throne in Athens under pressure from the Allies, Greece declared war on the Central Powers, ending three years of neutrality by entering World War I alongside Britain, France, Russia and Italy.

On July 2, 1937, the Lockheed aircraft carrying American aviator Amelia Earhart and navigator Frederick Noonan was reported missing near Howland Island in the Pacific. The pair were attempting to fly around the world when they lost their bearings during the most challenging leg of the global journey: Lae, New Guinea, to Howland Island.

On this day in 1964, U.S. President Lyndon B. Johnson signed into law the historic Civil Rights Act in a nationally televised ceremony at the White House.

A stampede of religious pilgrims in a pedestrian tunnel in Mecca leaves more than 1,400 people dead on this day in 1990. This was the most deadly of a series of incidents over 20 years affecting Muslims making the trip to Mecca

ONGC converted into corporation by ordinance.

Screening for Hepatitis C made mandatory all over India.

The Indian Army launched a three pronged attack on Kargil.