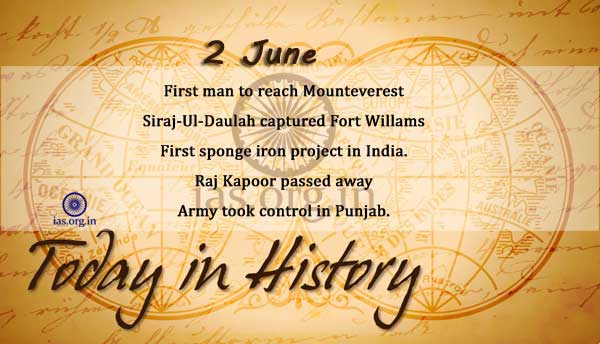 Fort William, the English stronghold in Bengal, was surrendered to Siraj-ud-Daulah.

Mountaineer Edmund Hillary of New Zealand and his Nepalese Sherpa guide Tensing became the first men to conquer Mount Everest, the world’s tallest mountain. The two reached the pinnacle of Everest, more than 29,000 feet above sea level, at 11.30 a.m.

Army took control in Punjab as 22 people were killed in Sikh struggle for autonomy. The state was declared a restricted area under the Foreigners’ Act.

The government accepted all the 15 recommendations of the Janakiraman Committee which unearthed massive collusion of banks in the security scam.

Saudi Boeing 747 Jumbo with 348 people on board missed the Meenambakkam international airport, Chennai and forcelands at Tambaram Air Force strip.

Today in History- 30 May