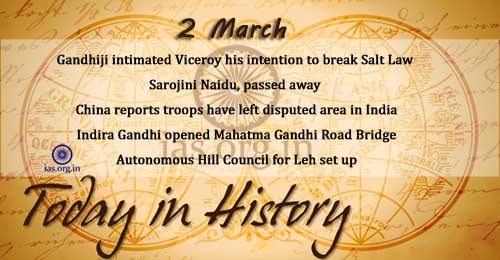 Gandhiji addresses letter to Viceroy intimating his intention to break Salt Law if Congress demands are not conceded.

Sarojini Naidu, “Nightingale of India”, freedom fighter, social worker and patriot, passed away when she was the Governor of Uttar Pradesh. She also holds a place of pride among the women freedom fighters of India. She presided over the Kanpur session of Indian National Congress. She took active part in Salt Satyagraha and represented Indian women in Round Table Conference, London.

Mother Teresa University inaugurated by Mother herself at Kodaikanal in Tamil Nadu.