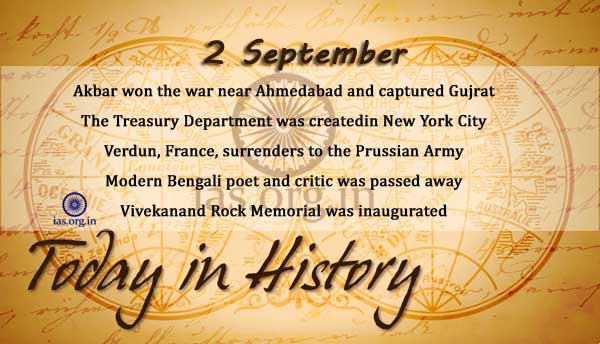 Akbar won the war near Ahmedabad and captured Gujrat.

The Great Fire of London, which devastates the city, begins.

The Treasury Department, headed by Alexander Hamilton, is created in New York City.

Napoleon III capitulates to the Prussians at Sedan, France.

Jawaharlal Nehru, was sworn in as the Prime Minister of the Interim Government of Undivided india, against Partition.

Parliament abolishes the privileges of 279 maharajahs in New Delhi.

Thousands of Sikhs rally at Golden Temple to protest govt. occupation in Amritsar.

The US and Russia agree to a joint venture to build a space station.

Nishant, the pilotless training aircraft developed by DRDO, is successfully flown from Chandipore.