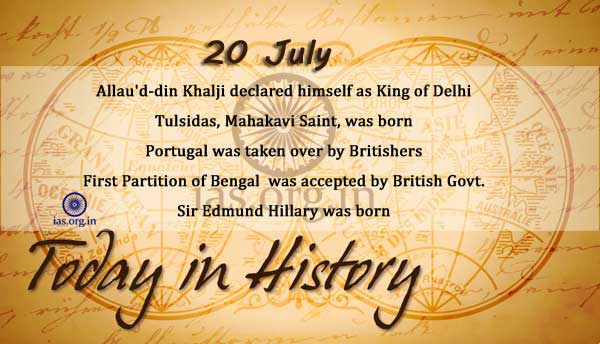 John Oldham, trader of mass, was murdered by Indians.

Portugal was taken over by Britishers.

Jankibai passed away in jail.

British to increase size of Royal Army in India.

First Partition of Bengal, which was proposed by Lord Curzon, was accepted by British Government’s Minister of India.

On July 20, 1919, Edmund Hillary was born in Auckland, New Zealand. A beekeeper by trade, Hillary became the first human, along with Nepalese Sherpa Tenzing Norgay, to reach the peak of Mount Everest on May 29, 1953. At 29,035 feet, Mount Everest is the tallest mountain on Earth, as well as one of the most forbidding.

At 10:56 p.m. EDT, American astronaut Neil Armstrong, 240,000 miles from Earth, spoke these words to more than a billion people listening at home: “That’s one small step for man, one giant leap for mankind.” Stepping off the lunar landing module Eagle, Armstrong became the first human to walk on the surface of the moon.

On the seventh anniversary of the Apollo 11 lunar landing, the Viking 1 lander, an unmanned U.S. planetary probe, became the first spacecraft to successfully land on the surface of Mars.

A flash flood hit Johnstown, Pennsylvania, on this day in 1977, killed 84 people and caused millions of dollars in damages. This flood came 88 years after the infamous Great Flood of 1889 that killed more than 2,000 people in Johnstown. As they had in the first flood, the dams in the Conemaugh Valley failed, bringing disaster to the town.

Chithira Tirunal Bala Rama Varma, former Maharaja of Travancore, passed away at the age of 78 years after a brief illness. His term as the descendant of the Chera dynasty saw many progressive reforms in the field of legislation, education and many more. He was hailed as “Ashoka the second”, and Gandhiji parised him.