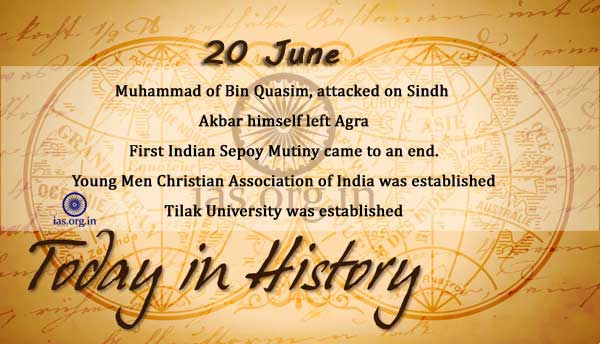 A group of British soldiers along with Halvel were imprisoned by some rebellions in a suffocating cell that gained notoriety as the “Black Hole of Calcutta.” Most of them died.

Gwalior fort was captured by British troops and the first Indian Sepoy Mutiny officially came to an end.

Young Men Christian Association of India was established in Calcutta.

Kashmir authorities arrested President-elected Nehru for refusing to obey an order banning him from the state.

Lord Mountbatten resigns as the Governor General of Indian Union.

Govt. of India declared at Geneva conference on ‘Global Ban On Nuclear Testing’ that it won’t sign the CTBT.

Second round of Foreign Secretary-level talks between India and Pakistan started in Islamabad.