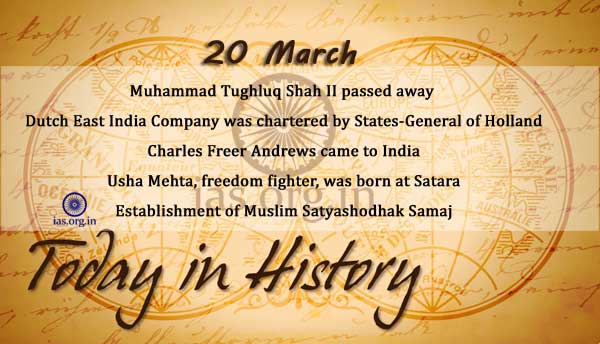 Charles Freer Andrews came to India as a Christian Missionary and joined the staff of St. Stephen’s College in Delhi.

Usha Mehta, freedom fighter, was born at Satara. Her name is closely attached with freedom movement via Bombay Radio, as she and Babubhai Prasad and Vitthalbhai Zaveri founded this Radio and started motivating people of India with their telecasts.

Marquess Curzon of Kedleston died this morning at age 66 from complications following an operation. Long a kingpin of the Conservative party, Lord Curzon spent 40 years in public life, serving as Viceroy and Governor General of India and, at the end of his career, as Secretary of State for Foreign Affairs. Though he came close to becoming prime minister in 1923, his aristocratic past militated against him in an era which nominated leaders from the House of Commons. He twice wed US women and enjoyed fame as an author of books about politics and his own travels.

For the first time in the history of the competition, Scotland beats England for rugby’s Calcutta Cup in London.

For the first time, officials of the Indian government confirmed reports of widespread resistance to the Chinese occupying forces in Tibet. Open warfare erupted in the capital city of Lhasa.