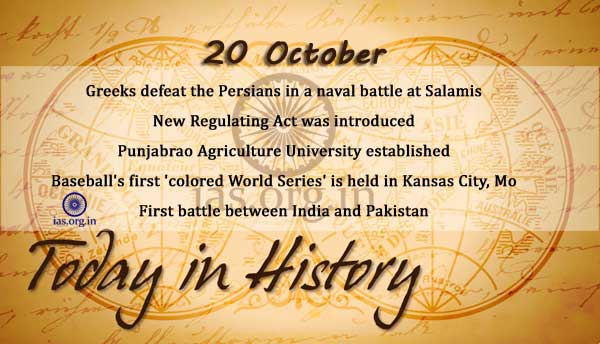 Greeks defeat the Persians in a naval battle at Salamis.

New Regulating Act was introduced which abolished the East India Company Government and a new Government was formed.

First battle between India and Pakistan.

Indian mountaineers reach the peak of Nanda Ghunti for the first time in the Kumaon Hills.

Andhra Pradesh Government announces a five-day week for all offices and educational institutions from November 01, 1990.

Nirad C. Chauduri, 94, the Indian writer living in Oxford, made honorary Commander of the British Empire.

The Cabinet approves the Insurance Regulatory Authority (IRA) Bill for introduction in the current session of Lok Sabha if time permits.