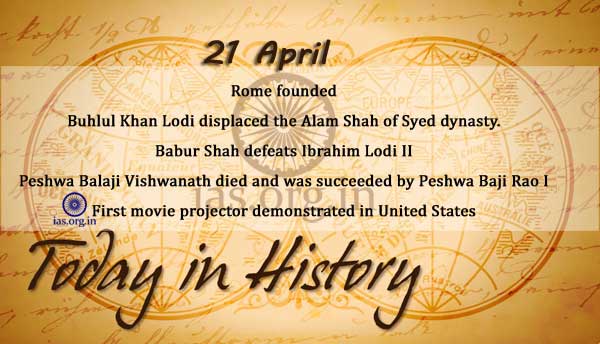 According to tradition, on April 21, 753 B.C., Romulus and his twin brother, Remus, found Rome on the site where they were suckled by a she-wolf as orphaned infants. Actually, the Romulus and Remus myth originated sometime in the fourth century B.C., and the exact date of Rome’s founding was set by the Roman scholar Marcus Terentius Varro in the first century B.C.

Buhlul Khan Lodi, an Afghan and founder of Lodi dynasty, ascends the throne of Delhi and displaced the Alam Shah of Syed dynasty.

Mughal conqueror Babur Shah (1483-1530) defeats Ibrahim Lodi II, the Lodi Sultan of Delhi, and captures Delhi and the Koh-i-noor diamond, in the First Battle of Panipat. He founded the Mughal dynasty in India (1526-1761), consolidated by his grandson Akbar.

Peshwa Balaji Vishwanath passed away and was succeeded by his son Peshwa Baji Rao I. He was a great soldier and General.

Woodville Latham and his sons, Otway and Gray, demonstrate their “Panopticon,” the first movie projector developed in the United States. Although motion pictures had been shown in the United States for several years using Thomas Edison’s Kinetoscope, the films could only be viewed one at a time in a peep-show box, not projected to a large audience.

Preview show of ‘Raja Harishchandra’ was held on April 21 at Olympia Cinema.

A fire at an Ohio prison kills 320 inmates, some of whom burn to death when they are not unlocked from their cells. It is one of the worst prison disasters in American history. The Ohio State Penitentiary was built in Columbus in 1834.

Avadi session of the Indian National Congress adopts a socialistic pattern of society for India.

Sanjay Thapar of the IAF (leader) becomes first Indian to parachute down to geometric North pole and unfurl the flag.

Inder Kumar Gujaral sworn as the 12th Prime Minister of India, along with old council of ministers in the H. D. Deve Gowda govt. minus Tamil Maanila Congress Minister and D. P. Yadav of Janata Dal.