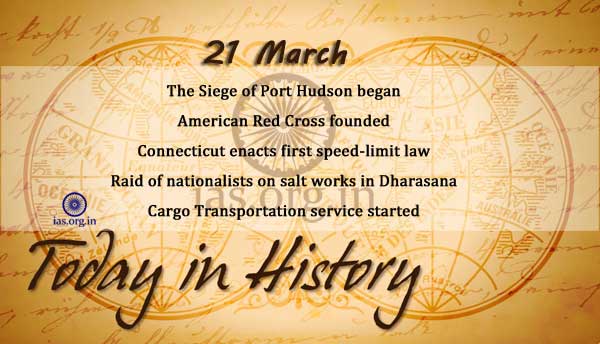 On this day The Siege of Port Hudson began under the commandership of Nathaniel Banks. Port Hudson was considered an important installation for the South since it was a significant threat to Federal ships on the Mississippi River.

In Washington, D.C., humanitarians Clara Barton and Adolphus Solomons found the American National Red Cross, an organization established to provide humanitarian aid to victims of wars and natural disasters in congruence with the International Red Cross.

On this day in 1901, Connecticut becomes the first state to pass a law regulating motor vehicles, limiting their speed to 12 mph in cities and 15 mph on country roads.

American pilot Charles A. Lindbergh landed at Le Bourget Field in Paris, successfully completing the first solo, nonstop transatlantic flight and the first ever nonstop flight between New York to Paris. His single-engine monoplane, The Spirit of St. Louis, had lifted off from Roosevelt Field in New York 33 1/2 hours before the landing time in Paris.

A raid of nationalists on salt works in Dharasana results in 630 casualties and the arrest of Mrs. Naidy, leader of the Civil Disobedience campaign.

Five years to the day that American aviator Charles Lindbergh became the first pilot to accomplish a solo, nonstop flight across the Atlantic Ocean, female aviator Amelia Earhart becomes the first pilot to repeat the feat, landing her plane in Ireland after flying across the North Atlantic. Earhart traveled over 2,000 miles from Newfoundland in just under 15 hours.

On this day in 1960, the first tremor of a series hit Valdivia, Chile. By the time they ended, the quakes and their aftereffects had killed 5,000 people and left another 2 million homeless. Registering a magnitude of 7.6, the first earthquake was powerful enough to kill several people. It turned out to be only a foreshock, however, to one of the most powerful tremors ever recorded.

The 26-mile feeder canal from Farakka to the Bhagirathi river is dedicated to the nation.

Sushmita Sen (Miss India), at the age of 18, was crowned as the 43rd Miss Universe.

A powerful bomb exploded and another was defused on the road leading to the Imphal airport minutes before the Prime Minister had landed to commence his two-day visit to the State.