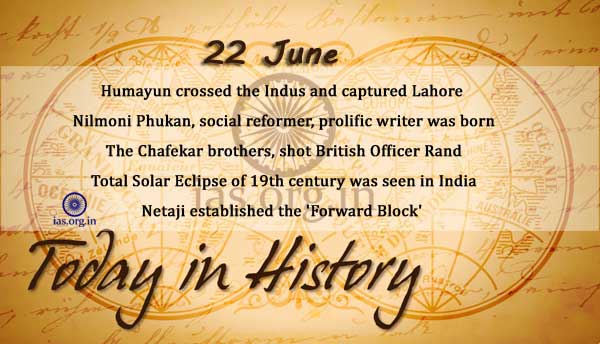 The last total Solar Eclipse of 19th century was seen in India.

On this day in 1944, U.S. President Franklin D. Roosevelt signed the G.I. Bill, an unprecedented act of legislation which was designed to compensate returning members of the armed services–known as G.I.s–for their efforts in World War II.

During World War II, the U.S. 10th Army overcame the last major pockets of Japanese resistance on Okinawa Island, ended one of the bloodiest battles of World War II. The same day, Japanese Lieutenant General Mitsuru Ushijima, the commander of Okinawa’s defense, committed suicide with a number of Japanese officers and troops rather than surrender.

Emperor of India title was deleted from His Majesty the King of United Kingdom’s titles.

On this day in 2008, the influential comic writer, actor and stand-up comedian George Carlin dies of heart failure at the age of 71.

After nearly 15 years of civil war, opposing factions in Angola agreed to a cease-fire to end a conflict that had claimed hundreds of thousands of lives. The cease-fire also helped to defuse U.S.-Soviet tensions concerning Angola. Angola was a former Portuguese colony that had attained independence in 1975.

Ordinance to amend Consumer Act was issued; Government doctors and hospitals were kept out of its ambit.

Law for the betterment of women introduced.

India and International Committee of the Red Cross (ICRC) signed MOU enabling them to visit suspected militants and persons in detention centres only under humanitarian consideration.

On this day in 2008, the influential comic writer, actor and stand-up comedian George Carlin dies of heart failure at the age of 71.