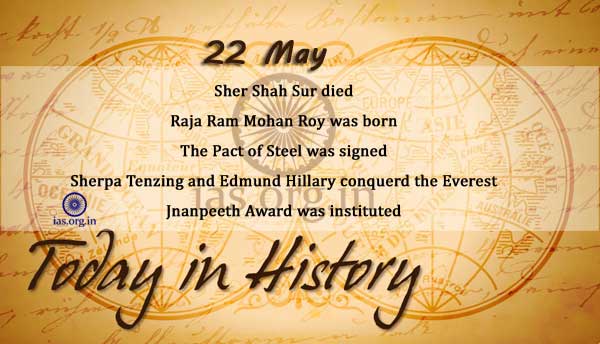 Sher Shah Sur died. He was fatally wounded in an explosion on Kalanjara fort while preparing for an attack. He introduced the new silver rupee-coin “Rupiya” based on ratio of 40 copper coin pieces (paisa) per rupee and built several roads including the longest road of India known as Grand Trunk Road (now Natioinal Highway).

A massive first major wagon train, made up of 1,000 settlers and 1,000 head of cattle, sets off down the Oregon Trail from Independence, Missouri. Known as the “Great Emigration,” the expedition came two years after the first modest party of settlers made the long, overland journey to Oregon.

Suniti Chaudhary, revolutionary freedom fighter, was born at Kumilla. She was one of the accused in the famous Chargaon ammunition plot and assassination of General Lemen, Inspector General of Dhaka.

On this day in 1939, Italy and Germany agreed to a military and political alliance, giving birth formally to the Axis powers, which will ultimately included Japan. Mussolini coined the nickname “Pact of Steel” (he had also come up with the metaphor of an “axis” binding Rome and Berlin) after reconsidering his first choice, “Pact of Blood,” to describe this historic agreement with Germany.

Erapalli Anantrao Srinivasarao Prasanna, cricketer (one of India’s big four spinners, Right-arm Off-break Bowler), was born at Bangalore. He was also the receipent of Arjun Award (1968) and Padmashree (1970).

Sherpa Tenzing Norgay of Darjeeling and Edmund Hillary of New Zealand were the first to conquer the Mount Everest (World).

Jnanpeeth Award was instituted and the first award was given in 1965. This award is given for the best creative literary writing by any Indian citizen in any of the languages included in the VIII Schedule of the Indian Constitution. The award carries a cash price of Rs 2.5 lakh, a citation and a bronze momento.

Rohini, Glider, became the first to successfully fly at Kanpur.