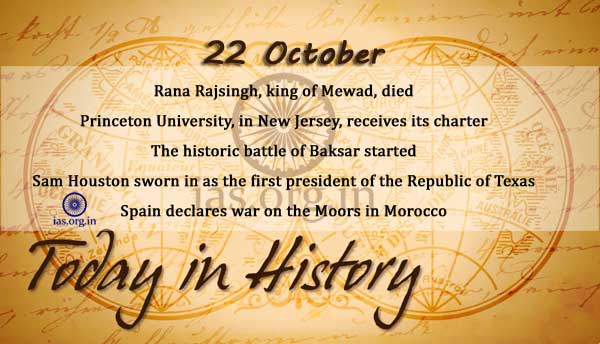 The first successful parachute descent was made by Andre-Jacqes Garnerin, who jumps from a balloon at some 2,200 feet over Paris.

Sam Houston sworn in as the first president of the Republic of Texas.

Spain declares war on the Moors in Morocco.

Gandhiji accompanied Gokhale on tour of South Africa, Laurenco Marques, Mozambique and Zanzibar. He gave up European dress and milk and restricted himself to diet of fresh and dried fruits.

Gandhiji presided over the educational conference at Wardha and outlined his scheme of education through basic crafts.

The prototype of the F-105 Thunder Chief makes its maiden flight.

The Union government reduces the upper age limit for the Civil Services Examination from 28 years to 26 years.