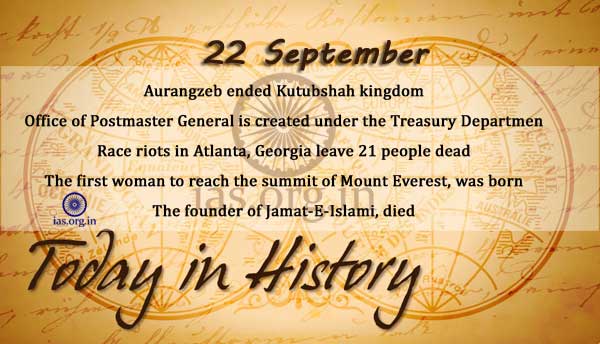 The Sultan, losing his hold over the army and some members of his aristocracy, very wisely abdicated in favour of his brother Ahmad, who is famous in Deccan history as Ahmad Shah Wali.

24 merchants gathered in London’s Founder Hall under the auspices of Lord Mayor to start a new company with a share captial in India.

Office of Postmaster General is created under the Treasury Department.

The last contingent of Indian freedom fighters was send to Andaman & Nicobar Islands.

The Iran-Iraq War begins as Iraq invades Iran; lasting until August 1988, it was the longest conventional war of the 20th century.

India asks Pakistan to prevent the reported attempt by the JKLF to cross the Line of Control (LOC) on October 4.