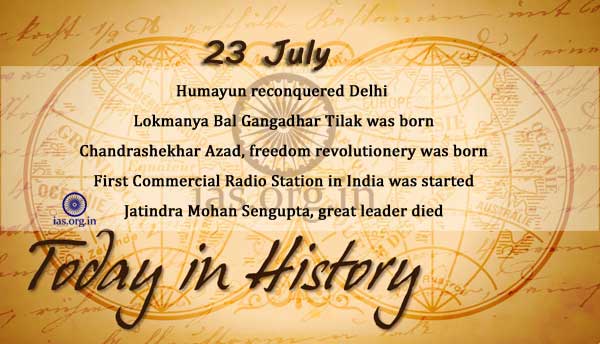 Humayun reconquered Delhi after defeating Sher – Shah Alias Sikandar Suri in Machiwara and Sarhind battles. It was said that he won the crown but not the empire.

On this day in 1793, Roger Sherman, a Connecticut Patriot and member of the Committee of Five selected to draft the Declaration of Independence, died of typhoid in New Haven, Connecticut, at age 72.

Jatindra Mohan Sengupta, great leader, lawyer, social worker, freedom fighter, nationalist and president of Bengal Swaraj Party, died at Ranchi. He was addresed by the people of Bengal as ‘Deshapriya’ (Beloved of the Country).

One of the worst riots in U.S. history broke out on 12th Street in the heart of Detroit’s predominantly African-American inner city. By the time it was quelled four days later by 7,000 National Guard and U.S. Army troops, 43 people were dead, 342 injured, and nearly 1,400 buildings had been burned.

On this day in 1984, 21-year-old Vanessa Williams gave up her Miss America title, the first resignation in the pageant’s history.

Vishwanath Pratap Singh, Indian Prime Minister and Gorbachev signed joint declaration committing their countries to build a nuclear-free and non-violent world in the first Indian-Soviet summit in the post-Gorbachev Soviet Union in Moscow.

Indian National Satellite (INSAT-2B), second satellite in the INSAT-2 series, was launched. This was more operational multi-purpose communication and enhanced meteorology satellite. It is still in service. It was launched by European Ariane launch vehicle.

On July 23, 1996, at the Summer Olympics in Atlanta, Georgia, the U.S. women’s gymnastics team won its first-ever team gold.

India’s admission to Asian Regional Forum was endorsed by Foreign Ministers of the group at Jakarta.

India decided to sign U.N. Convention against torture and other cruel, inhuman or degrading treatment or punishment.