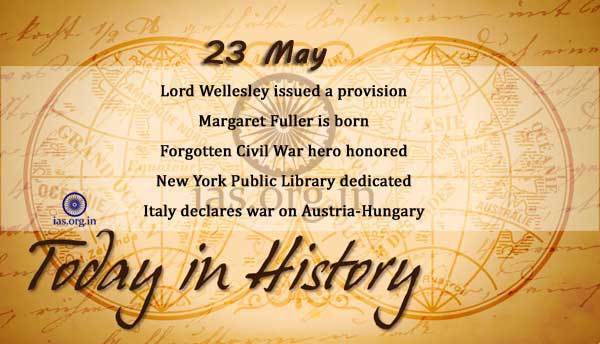 Writer and editor Margaret Fuller, who inspired other Americans to devote themselves to learning, was born on this day.

Sergeant William Harvey Carney was awarded the Congressional Medal of Honor for his bravery on July 18, 1863, while fighting for the Union’s cause as a member of the 54th Massachusetts Colored Infantry. He was the first African American to receive the Medal of Honor, which was the nation’s highest military honor.

In a ceremony presided over by President William Howard Taft, the New York Public Library, the largest marble structure ever constructed in the United States, was dedicated in New York City. Occupying a two-block section of Fifth Avenue between 40th and 42nd Streets, the monumental beaux-arts structure took 14 years to complete at a cost of $9 million. The day after its dedication, the library opened its doors to the public, and some 40,000 citizens passed through to make use of a collection that already consisted of more than a million books.

The U.K. Cabinet today took the historic step of agreeing to Lord Mountbatten’s proposal for the partition of India into two states, one Muslim and the other Hindu. The Viceroy was to have a series of talks with Lord Listowel, the Secretary for India.

Bachendri Pal, an employee of Tata Iron and Steel Co. Limited at Jamshedpur, conquered the summit of Mount Everest to become the first Indian woman and the fifth women in the world to achieve this feat.

The Federal Republic of Germany (popularly known as West Germany) was formally established as a separate and independent nation. This action marked the effective end to any discussion of reuniting East and West Germany.

A tsunami caused by an earthquake off the coast of Chile traveled across the Pacific Ocean and killed 61 people in Hilo, Hawaii, on this day in 1960. The massive 8.5-magnitude quake had killed thousands in Chile the previous day.