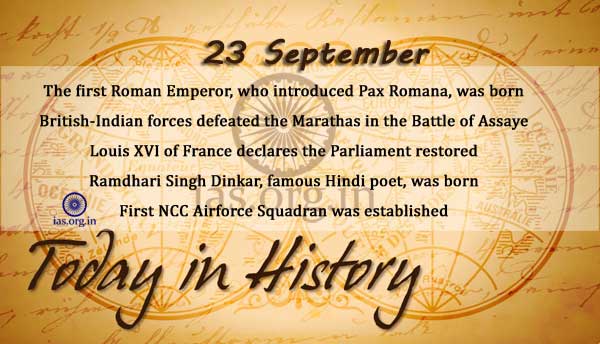 The Sadians defeat the last of their enemies and establish themselves as rulers of Morocco.

Slaves in Virginia are banned from obtaining their freedom by converting to Christianity.

The Austrians sign the Treaty of Belgrade after having lost the city to the Turks.

British-Indian forces defeated the Marathas in the Battle of Assaye.

The first American dies in Vietnam during the fall of Saigon to French forces.

The Indian Army secured the Kashmir Valley and the only object left was to clean out the remnants of the Gibraltar Force. Under the guidance of United Nations, the cease-fire came into effect.

The first public version of Mozilla Firefox browser released; originally called Phoenix 0.1 its name was changed due to trademark issues with Phoenix Technologies.