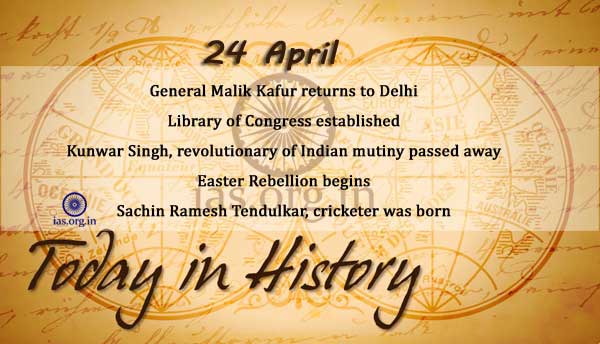 President John Adams approves legislation to appropriate $5,000 to purchase “such books as may be necessary for the use of Congress,” thus establishing the Library of Congress. The first books, ordered from London, arrived in 1801 and were stored in the U.S. Capitol, the library’s first home.

Kunwar Singh, revolutionary of Indian mutiny and freedom fighter, passed away. He fought his last battle near Jagdishpur, Bihar on April 23, 1858 and defeated the Britishers but was deeply wounded. He also organised the national rebels.

On Easter Monday in Dublin, the Irish Republican Brotherhood, a secret organization of Irish nationalists led by Patrick Pearse, launches the so-called Easter Rebellion, an armed uprising against British rule.

Colin Ross is hanged to death in Australia for the rape and murder of 13-year-old Alma Tirtschke. Ross was one of the first criminals in Australia to be convicted based on forensic evidence.

Sachin Ramesh Tendulkar, cricketer (prodigy at 16, Indian capt at 23), was born in Bombay.

SC holds that bank managers acting beyond their authority in allowing overdrafts and passing cheques would be amounted to committing misconduct.