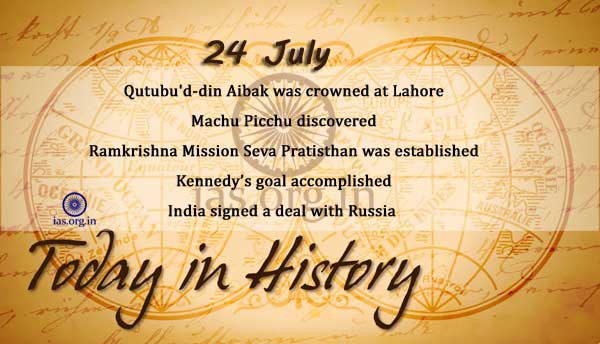 Qutubu’d-din Aibak (1206-1210) was crowned at Lahore after the death of Muhammad of Ghuri. He was originally a slave of Turkestan. As he started his career as a slave, the dynasty founded by him in India is known as “Slave Dynasty”. The construction of Qutab Minar was started during his regime. Since he was very generous, the people called him “Lakh Baksh”.

On July 24, 1911, American archeologist Hiram Bingham got his first look at Machu Picchu, an ancient Inca settlement in Peru that is now one of the world’s top tourist destinations.

Ramkrishna Mission Seva Pratisthan was established for the service of the sick and humanitarian activities.

At 12:51 EDT, Apollo 11, the U.S. spacecraft that had taken the first astronauts to the surface of the moon, safely returns to Earth.

Govt. decided to raise the ceiling on the maximum amount of retirement/death gratuity from Rs. 1 lakh to Rs. 2.50 lakhs.

Mahasweta Devi, Bengali litterateur, was recipient of this year’s Ramon Magsaysay Award for journalism, literature and creative communication arts for her writings on indigenous communities.

India signed a deal with Russia for purchasing the aircraft-carrier.