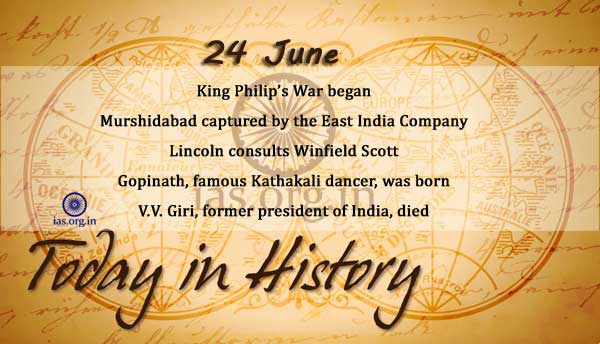 In colonial New England, King Philip’s War began when a band of Wampanoag warriors raid the border settlement of Swansee, Massachusetts, and massacre of the English colonists there.

Murshidabad was captured by the East India Company under Major Adams for the second time, and Mir Jaffar was declared the King.

On this day, President Abraham Lincoln met with retired General Winfield Scott, a hero of the Mexican War and the commander of all Union forces at the outbreak of the Civil War.

Hari Chapekar Damodar was born virtually. He was the first terrorist of India.

One of the most dramatic standoffs in the history of the Cold War began, as the Soviet Union blocked all road and rail traffic to and from West Berlin. The blockade turned out to be a terrible diplomatic move by the Soviets, while the United States emerged from the confrontation with renewed purpose and confidence.

Indian Manufactured Supersonic fighter HF24 and flew it and took to air for the first time.

Government announced that unmarried mothers under its employment would also get maternity leave.

Pranab Mukherjee was appointed Dy. Chairman of the Planning Commission.