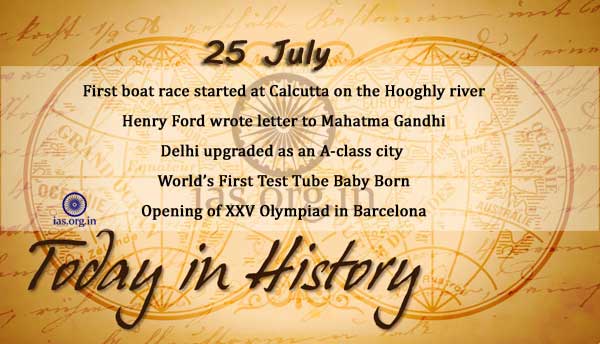 First boat race started at Calcutta on the Hooghly river where seven sailing boats had competed.

On this day in 1941, the American automaker Henry Ford sat down at his desk in Dearborn, Michigan and wrote a letter to the Indian nationalist leader Mohandas Karamchand Gandhi. The letter effusively praised Gandhi and his campaign of civil disobedience aimed at forcing the British colonial government out of India.

Indian Government declared in Lok Sabha that Portuguese’s were asked to close their offices in New Delhi.

Delhi upgraded as an A-class city on the basis of provisional Census figures of 1961.

On this day in 1978, Louise Joy Brown, the world’s first baby to be conceived via in vitro fertilization (IVF) was born at Oldham at District General Hospital in Manchester, England, to parents Lesley and Peter Brown. The healthy baby was delivered shortly before midnight by caesarean section and weighed in at five pounds, 12 ounces.

On July 25, 1992, the opening ceremonies of the Games of the XXV Olympiad were held in Barcelona, Spain. The Barcelona Olympics were the first ever in which professional athletes were allowed to participate, and the first Games since 1972 in which every member nation of the International Olympic Committee competed.

An Air France Concorde jet crashes upon takeoff in Paris on this day in 2000, killing everyone onboard as well as four people on the ground. The Concorde, the world’s fastest commercial jet, had enjoyed an exemplary safety record up to that point, with no crashes in the plane’s 31-year history.