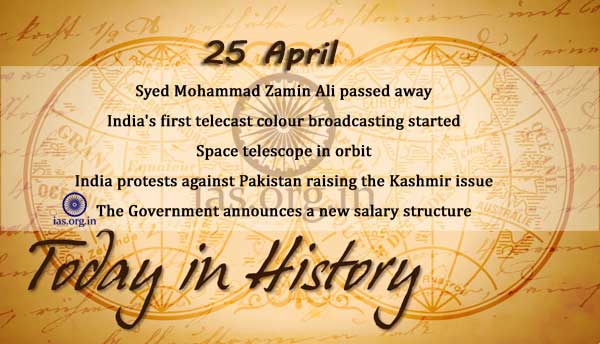 At Port Said, Egypt, ground is broken for the Suez Canal, an artificial waterway intended to stretch 101 miles across the isthmus of Suez and connect the Mediterranean and the Red seas.

Invalappil Mani Vijayan (or better known as IM Vijayan), Indian Soccer(Football) player, was born in Trissur, Kerala. He was recognised as Indian Player of the Year in 1993, 1997, 1999.

The crew of the U.S. space shuttle Discovery places the Hubble Space Telescope, a long-term space-based observatory, into a low orbit around Earth. The space telescope, conceived in the 1940s, designed in the 1970s, and built in the 1980s, was designed to give astronomers an unparalleled view of the solar system, the galaxy, and the universe.

The Government announces a new salary structure for university and college teachers, consequent to the implementation of the Fifth Pay Commission recommendations.

The Supreme Court clears the decks for continuing the trial against AIADMK leader Jayalalitha in the controversial ”TANSI land deal case” by ”erasing” the Madras High Court judgment discharging her from the case.

From a hideout in North 24 Parganas district, West Bengal police nabbed Belal alias Lalu Mian, the suspected mastermind behind the hijacking of IC-814 IA flight to Kandahar in December 1999.