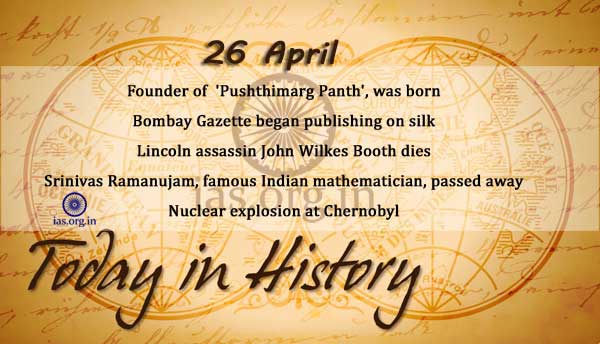 John Wilkes Booth was killed when Union soldiers tracked him down to a Virginia farm 12 days after he had assassinated President Abraham Lincoln.

Ramabai Ranade, social reformer, passed away. She played a major role in the upliftment of women in India and had founded Sevasadan in Bombay, a hostel for the ladies.

British fliers made a record nonstop 4,130-mile trip from London to India.

V. K. Ramaswamy, cricket test umpire for 10 tests from 1984-till date, was born at Hyderabad. He has become one of the first Indian Test umpires to be invited to do umpiring in a foreign country along with P. D. Reporter.

The Salk polio vaccine field trials, involving 1.8 million children, began at the Franklin Sherman Elementary School in McLean, Virginia. Children in the United States, Canada and Finland participated in the trials, which used for the first time the now-standard double-blind method, whereby neither the patient nor attending doctor knew if the inoculation was the vaccine or a placebo. On April 12, 1955, researchers announced the vaccine was safe and effective and it quickly became a standard part of childhood immunizations in America. In the ensuing decades, polio vaccines would all but wipe out the highly contagious disease in the Western Hemisphere.

The world’s worst nuclear accident to date happened at the Chernobyl nuclear plant near Kiev in Ukraine. The full toll from this disaster is still being tallied, but experts believe that thousands of people died and as many as 70,000 suffered severe poisoning.

Indian Newspaper Society (INS) called off its stir plans following Government conceding a major demand of the newspaper industry by putting newsprint on the Open General Licence (OGL) and abolishing the condition requiring newspapers to buy two tonnes of indigenous newsprint in order to import one tonne.