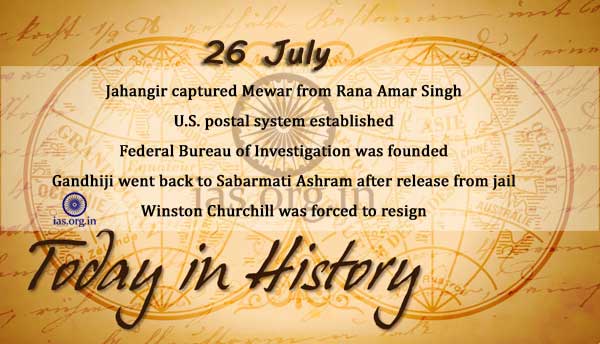 Jahangir captured Mewar from Rana Amar Singh. A treaty was signed in the Mughal court, Rana and his son were treated with exceptional courtesy.

On this day in 1775, the U.S. postal system was established by the Second Continental Congress, with Benjamin Franklin as its first postmaster general.

The Republic of Liberia, formerly a colony of the American Colonization Society, declared its independence. Under pressure from Britain, the United States hesitantly accepted Liberian sovereignty, making the West African nation the first democratic republic in African history.

Confederate cavalry leader John Hunt Morgan and 360 of his men were captured at Salineville, Ohio, during a spectacular raid on the North.

A swarm of grasshoppers descended on crops throughout the American heartland, devastating millions of acres. Iowa, Nebraska and South Dakota, already in the midst of a bad drought, suffered tremendously from this disaster.

Gandhiji went back to Sabarmati Ashram after his release from jail.

In the 11th hour of World War II, Winston Churchill was forced to resign as British prime minister following his party’s electoral defeat by the Labour Party.

President Harry S. Truman signed the National Security Act, which became one of the most important pieces of Cold War legislation. The act established much of the bureaucratic framework for foreign policymaking for the next 40-plus years of the Cold War.

The Centre imposed a ban on employing children below 14 years as domestic servants by all Government employees in the All India services at the insistence of the NHRC.